From Ground to Brick to Dust 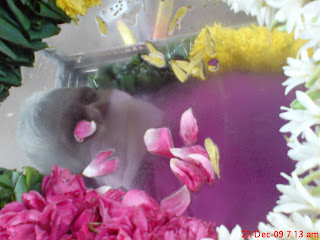 When this house was being built in 1992, one of the labourers was gored by a cow. Rajamba had been treating it herself with country herbs, but it was to no use, for when she brought the place to me for inspection, pus was oozing out. The wound was very deep and far beyond anything I could do, so I sent her packing off to a good hospital in town, and within days it was well on the way to getting better.

Even when wounded, Rajamba didn't stop work of one kind or another, not even for one day. She'd been labouring for this house, carrying bricks, cement and buckets of water. After her accident, she took a few days off from here and resorted to some field work, helping to bring in the paddy harvest; but not long after that, swathed in bandages oozing blood and acriflavine, she reported in one morning and was soon carrying pans of cement for the stonemasons again.

No record was ever made of her birth, and none will be made of her passing: Out of nothing she appeared, moved and had her being. And now she has returned to nothing. Less than a week after passing from us, she's already becoming a dim memory. Once the heat comes she'll be forgotten, without trace memory or any record that she ever existed.
Posted by ¶ aNu at Saturday, January 09, 2010