Who is the Fair Cop?

"Hello, Hello, May I have a word Sir?", shouted a voice I couldn't see.
Unable to see my mystery caller, I waited till he shifted himself round into my field of vision, even as I was trying to work out who it was. A uniformed copper bedecked with movie camera on his helmet and all kind of gear stepped in and said he'd like to ask me a few questions. Wondering what the heck might be the problem now, I recalled that Barney had just driven back from ASDA: Had he jumped a red light or done speeding?
I feebly stuttered "...err ask away!"

The seeds of my deepest fears were beginning to sprout and I knew the time had come for me to drill deep through the layer of the fragile world we see, in order to hook him in from the shadowy area on the surface of the choppy mind: my entire survival depended on keeping my car and driver, and I couldn't afford to lose either.
"Indeed it is, officer!" I smilingly aver whilst desperately summoning my inner strength.
He looks slightly crestfallen, for my sweet carer has been doing nothing more sinister than loading bags with the remnants of our picnic and loading them into the boot of the car.
"Just wanted to confirm that, Sir!" he adds: "These criminals make themselves look as though they're loading a vehicle when in fact they're stealing it." I glimpsed a weak link in his mental armoury and made to soften it with sympathy. "You don't say, officer! I'm fascinated" He was loosening up nicely. "Please tell me more!" 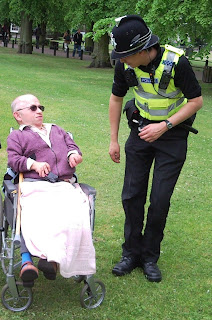 "Well Sir, you see it's like this..." He then launched himself into a saga of his duties and responsibilities which, when mingled with his sympathies and apologies, gave him a rather appealling mien. I had a brief mind-flash of bringing him down to my level, of being a mere boy again, up and bold and ready to indulge in a love-hate bout of fisticuffs. He's down to my world now for a wee chat and a bit of hand-contact, 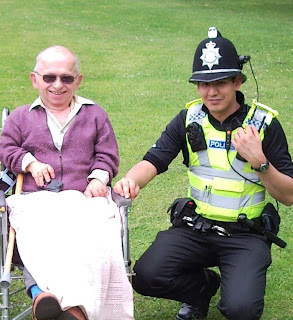 continuing to tell me in half-apologetic tone about how it could be seen that my little Rajah might have been making off with my bags and with my car. Of course this is exactly what Rajah was doing, only he was also taking me along with him: He didn't see that! Neither did he see that my short arms working in flicks and smooth curves.
Flashing my fingers and spinning silken threads from words, I was spinning a gossamer fabric on which he could focus his mind's eye as his eye-balls followed my finger 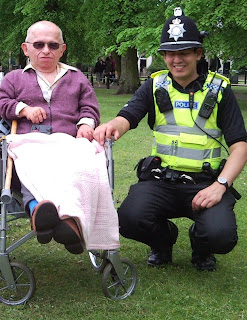 and I saw his attention wander, thence to focus somewhere in the depths of his recently-abandoned childhood. The rest was easy. Hooked with my yarn he travelled back to the time of innocence, when golden light played upon branches laden with apples. In short we were both held captive, and he was tickled pink. A final snap of the fingers and he was back

to being the friendly Bobby-on-the-Beat. Just a few seconds was all that it took. Beamingly he told me about how he was happy to be serving the community in this way and I beamed back at him; he called his mate over : he’d been cautiously watching from a short distance, but now he swam into view, joining the merry scene; and so we parted, our fates pulling us in our various ways. 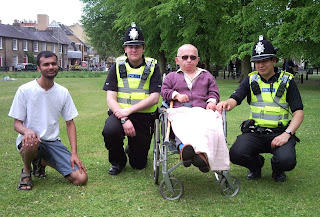 A snatched glimpse of their conversation revealed that he was training his mate on methods of approach, which explained the movie camera on his helmet and all the other gear he had strapped to him. "That's the way to do it..." came a whispered echo of his voice . Indeed, I reflect wistfully to myself: that indeed is the way it’s done.

Back home, while my innocent eastern lads unpack the shopping and put on the kettle for a cup of tea. I hobble to the scanner as I empty the contents of my pockets. The pen with its three ergonomically smooth-gripped edges perfectly fits the awkward curvature of my fingers and will, I’m sure, be my pocket companion for many years to come.


I'm grateful to Messrs P Kumaresan and P Bharanidharan for taking the photographs and also to the Cambridgeshire Police for allowing me to play with their Officers for a while.
Posted by ¶ aNu at Monday, May 24, 2010