A Small and Valiant Hero

It was over three years ago that a man arrived on my doorstep; in his hand was an ordinary shopping bag which he held away from me slightly, asking if I'd like to see what was inside. The bag heaved slightly, and I couldn't wait. I plunged my hands in to feel a ball of warm featheriness, and ever so gently lifted it out to see a guinea fowl whose beady eyes blinked in the bright light. So arrived Johnnie, a bird who was to be my pride and joy, keeping me company and strutting round the grounds to inspect everything and everybody.
Not only does he pick up worms, bugs and centipedes, but they say that he can pick pests and parasites off cattle too. He's very green, and a scrupulous biological control officer. There ain't no flies or fleas on him!


When you make a dive for Johnnie, he just crouches down on the ground, with a crooning noise ~ but only if you're human. If another animal tries to get near him, Johnny is off like a little rocket!

Within a few days of being birthed from his hand-bag womb, Johnnie has made himself completely at home. In fact, Johnnie treats the place as if he's lived here for ever.
And even longer than that.

When it comes to John's bath, the team of appointed bathers move in to do their duty. Bathing is a great daily event here, and  for maximum satisfaction for all, it's carried out in a small enclosure at the rear of the house.

For some it's a pleasure, for some it's a chore; some just want to get on with their study jobs and not spend an hour being swallowed up by the bathing and exercising ritual, but for Johnnie this event carried out at 10.00 a.m. each morning is an important job and a positive delight.

The special treat is, for some reason, my dirty bath-water. This would doubtless raise some eyebrows, were it to be witnessed in the outer and greater world. But Johnnie is crazy about sipping it while it's still warm, and I maintain that there are some vital micronutrients and trace elements which Johnnie finds beneficial to his health.

After the ritual of bathing, it's time to spend in quiet refection as we offer our devotions foe the day. Not to be left out, Johnnie is very methodical in his duties as a verger, and he pays his earnest respects to the many names and forms we give to the One Creator and the the source of all life and being:
A few days before we leave India, Johnnie becomes fully involved in the packing:

Good-bye dear Johnnie, you valiant wee policeman of a bird; I guess you're past middle age for a guinea fowl by now, and you must take good care of your health!
Regulating his life according to a strict and fastidious routine, Johnnie goes off duty when the shadows of night begin to fall. Ensuring that he hasn't left any loose ends behind, he heads for his favourite tall tree, where he flies aloft to perch on his favourite branch, away from night predators and snakes.

~   ~   ~   ~   ~   ~   ~   ~   ~   ~
Johnnie has left us now. Gone to meet his maker, as it were: Yesterday while quietly feeding, he was set upon by a gang of five hungry dogs, who attacked and him before tearing him to pieces and eating him up. It feels indescribably sad, that a quiet, peaceful and devoted being should meet his end in this violent way.

Good-bye, dear brave friend: For more than three year you shared our lives and our houses. I hope your end was quick and that it didn't hurt too much. 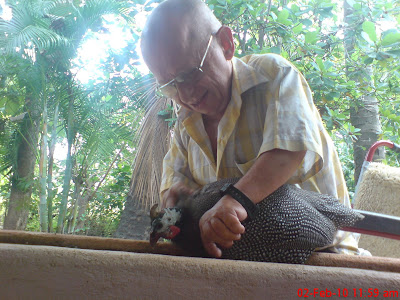