I was sittin' in me old winged armchair this morning, grumbling about the weather and the price of postage stamps and feeling a sneaky suspicion that I'd turned into an old grandpa somewhere along the line, when one of the boys sauntered in with a parcel, saying “Looks like your shower gel”. After giving it a good old rattle Barney added that it “feels like you’ve got about six bottles of it here. We told you not to order *that* batch! S’pose we’re all gonna run round the village ponging of ‘Lynx Aluminium’ now!”

I mumbled to put it on one side and said we’d stow it all away later before I went back to the mysteries of why my scanner wasn’t working with 64-bit architecture. I’m someone who hates geeks and geeky things when the current project drifts into realms I don’t understand, but once things have fallen into place and pennies have begun to drop, I admit to being quietly impressed, wondering why people don’t take a little more trouble to understand the mysteries of their black boxes.

That box of 6 shower gels, ordered in a moment of hypoxic haze, annoyed me by not being tidied away and I asked Barney to unpack it and stow it away as it looked as if we might be in for a storm. His sentence began with a whinge, but half-way through opening the package his tone changed to wonder. He said that the parcel appeared to be somewhat different. Unexpected and unexplained.

It was all in a "Whiskas" box which had presumably held an assortment of delicate meals for Puss, he said, adding that on the inner cardboard sleeve someone had written “Old People's Breakfasts”. So I decided that the solution was clear: An old people's home had stocked up on shower gel, and the new Health and Safety Rules had banned the old timers from using it in case they slipped. I speculated that tubs of Fullers Earth had been ordered instead and now the old folks could take dust baths along with their cats. Both cats and old ladies would be far cleaner than with shower gel, anyway. 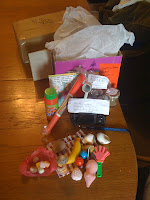 My excuses and implausible explanations quickly run out as the contents of the box began to seed out like a tombola onto our ample table:

Lots of small parcels spewed out of the box, each individually wrapped in pink tissue paper. There was a sugar mouse with a string tail such as I hadn't seen since the days of Christmas stockings, sweets, shells, a plastic rattle, a stick of rock, a bubble-blower, little pot of sand, a clay pipe and last but not least, a yellow clammy slug. I think you're supposed to eat it!

The boys whooped and laughed like little kids — and everybody was completely baffled.
Which is where we leave the tale. A packet of Bulls' Eyes was included in the mix and they're so good, we're going to suck our way through those first, and then try to find out who sent them.