“Welcome to our crazy country Barney: We’re lucky to have you!” is one of the most delightful SMS’s —text messages— I’ve ever heard. The message was delivered in a roundabout way to my carer Barney as we arrived at the Cambridgeshire County Council headquarters, Shire Hall no less, on our way to the pomp and grandeur of the Civil Citizenship Ceremony.

While my left ear was receiving this message of charm and welcome, my right eye saw a councillor dash out to the delightful West Indian car park attendant called “Fred” to ask rather urgently “Has the Mayor arrived yet?” “The ’oo?” said Fred as his face lifted in a gaze of total puzzlement.

The occasion was the Citizenship Ceremony of my carer and friend Barney.
I first met Barney somewhere in a paddy field in India when he was three years old. I was trying to dandle him on my knee, but he was far more interested in showing me the progress he was making in saying his ABC. Barney raced ahead but stumbled on the letter Q. His face twisted in frustration as he began to wonder why the alphabet was racing backward, so I handed him back to his uncle to help him with “koo” and RST.

The next part I remember easily was when he was a rather weedy little boy of ten. By this time he’d picked up English well, and when he started answering me back in that tongue I felt he was well and truly on his way. He said his English teachers were telling him about a film called “My Fair Lady” which he was asked to see but couldn’t. So when I told him the tale he gazed in wonderment and asked whether we could play that game and would I take the part of Professor Higgins. “Well you’re neither a lady, and your hair and complexion’s a bit light for this rôle, my little bantam chick” I answered, “but I don’t suppose I’d be terribly good at being Professor Higgins either. I suggest that you just stay as Barney without the Rubble and I’ll just be John without The Sir. Let’s put all we’ve got into this project to see how far we can take it. It may not work, but rest assured we’ll have a lot of fun along the way.”

A few more little hops, and all of a sudden my little bantam has grown into a strapping young man, and we’re in Cambridge Shire Hall, the nerve centre of the County of Cambridgeshire, the fastest growing county in the UK, which operates a dual world system of administrative realities. One of them is a paper world where everything is strict, magnificent and correctly managed. In this world the Citizenship Ceremony is managed with an opulence which reflects the past glory of the British Empire. Places are allocated, names are taken and everything falls into place with precision split-second timing. Messages are left on my answering phone that I may bring an extra guest, adding that everything is laid on for the wheelchair user. The car park attendant will show us to a Disability Parking Slot, where-after we’ll be directed to the Service Floor and Lifts. 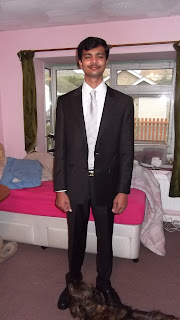 But in the real world of concrete not paper it’s cold and wet with driving drizzle and slippery steps. There’s an amiable but jobs-worthy car park attendant who doesn’t seem to know what a Mayor is. I’m chilled and raw and I’m waiting right at the bottom of a flight of stone steps, which is as much of a nightmare for wheelchair users as it’s always been.

The ceremony is received deep in the Inner Chamber of the Hive, where The Queen or Her authorized portrait receives the citizens of foreign lands, citizens who through associative contact with the UK have fed and grown, worked and turned themselves into plump budding pupæ, ready to hatch into fresh, opulent British Citizens.

The Hive is vibrant and buzzing now, mainly with the background hum of Musac which the Master of Ceremonies adjusts with his volume knob. A friend and I la-la along with it and receive a slight scowl from one of The Suits. We’re evidently not supposed to celebrate by voice until the National Anthem begins. After to-ing and fro-ing with some official worried looks when the Mayor and his wife appeared to be late, we begin. Citizens all have to exit to divide into two groups. One is for those who want to Swear their allegiance to Her Majesty and the other’s for the swarm who find that quietly affirming their intention is enough. The Musac rises to a volume sufficient to cause a few members to dab their eyes, everyone says their name —Barney’s warble is especially clear— and the new pupæs’ skins are popped as they duly emerge from their cases, eyes and skin shiny, iridescent and a little moist.

A cup o’ tea and a biscuit together with a chat from the Mayor is enough to harden their tender skins and drones, workers and future politicians are ejected out like popcorn from the warmth of the Hive out into the driving November drizzle. The ritual and the ordeal has past, we’re heading home, preparing to have a celebratory meal and put our heads down for the night. Sooner or later he’ll find that waking up British is much the same as waking up as anybody else...

Away from the cocooned warmth of the hive where he was swaddled with Musac and ritual, Barney must now pursue the hunt for the his own queen. Or she for him, as he may well soon find out!

Posted by WhoRamanoids at Tuesday, November 15, 2011