My Christmas Escapade ~ By Shadow

While I was enjoying a quiet Christmas in India, my dog Shadow in India was having his own idea of a good time. He and Barney had been invited over to Cambridge for the evening meal. Not long after arrival, a small group took him out for a walk in the chilly streets and ice-packed frosty air. All went well Shadow was the much-loved darling, the centre of attention, luxuriating in the fuss that was made of him. 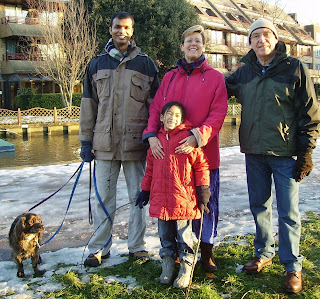 Back home, joints were rubbed and warmth crept into limbs as the fire of the Christmas spirit was kindled. Guests continued to arrive and as the merry throng chatted and greeted, the flames caught hold and started to blaze until the bell went.

One guest entered and this little blighter bolted out unto the dark frosty night. All rushed out onto their bikes calling his name while our host, who was right in the middle of cooking the meal, became frantic with worry, carefully tending the oven and wondering whether anyone would return to eat it.

Words fail me at this point, the point at which such behaviour in humans amounts to preposterous behaviour, our Shadow turned the situation round and will now relate his own version of the events, in the words of his Barney his amanuensis: