Scolding till the Mouth Hurts

...is an ancient, almost fabled Tamil saying which, even in this day and age, carries the force of a dragon, when administered in carefully titrated doses. Too little, and it will have no effect and time is wasted; too much and wounding may occur, or else a cut-off which shuts the door to the ears and is equally ineffective. Such scolding can not, and should not, evolve into a rant. And above all, they work most effectively when there is little or no self-interest at the heart of the admonishment. They're when the recipient comes to see that prudent heeding of harshly delivered words serves their family and children best. 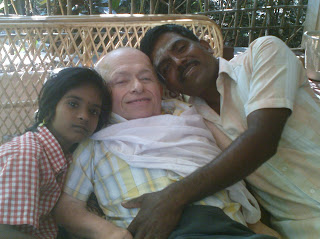 Sandiya has became afflicted a couple of years ago with fevers and shaking, night-sweats, and been waking up in the night with shortness of breath. Her schooling has suffered and for a little girl of nine she has been right through the mill of suffering. We've had her in the CMC Hospital at Vellore more times than we can remember, and even after poring over the doctors' reports and prescriptions which have been sent to me over the seasons, it has been impossible to determine what the diagnosis of her ailment is. I've sent the mails with the scans to friends whose children are now doctors, and the same report has come back to me that, based on what they've seen, it's really not possible to say what the problem is. And so the situation goes on.

The other day she came into my room and stood by the bed. I took her hand and felt along her arm, noticing how cold it was. It's always like this, and I've taken to assuming that the chilly skin is wrapped up with the problem.

After some time she was joined by two her friends aged 5 and seven, and they climbed onto the mattrress (Sandhiya moving slowly and delicately) and we chatted together and played some songs. A cosy amtmosphere soon built up until after 25 minutes or so, Sandiya shifted, telling me that she needed to go home and study, for the following day she was sitting for an exam.

I took the opportunity of asking the other two little ones to return to their houses as we all had things to do, and it was at the point of coming up for a hug good-bye. I realised that she was now warm all over, and at that point the realisation hit me that she had on no more than a pair of boy's shorts and a thin short-sleeved shirt. No wonder she was so cold!

It took a few minutes for this to settle in, after which my tongue broke its chains and I began scolding those who are near-by. Hadn't we been sending her to hospital for tests for more than two years? Had we not passed her bulletins round amongst concerned friends in England and the UK? Had not those same friends tossed coins into the hat to enable her tests and procedures to be carried out? How can a reasonable parent expect their child to have any hope of getting better if she wanders around in this cool, rainy weather dressed little better than a street ragamuffin selling dusty sweets by the roadside?

Delivered in the form of a series of rhetorical questions, these 'scoldings', when delivered to the right people and in the correct dose, may have a deep-seated effect. And in this case it's not for me to deliver them directly to the parents: they are not the 'right people' for me. I reprimand the tea, the team, secure in the knowledge that the admonitions will be sifted, filtered and delivered in the way that they might understand.

Let's see what effect the ripples have as they radiate from this house to theirs. If we can't get to the bottom of her problem, we can and should be able to make her life more comfortable.
Posted by ¶ aNu at Wednesday, December 23, 2009